Up until a short time ago, if a beginner asked which mixer they should buy to get them started, the majority of people would say a Vestax 05. Since then, the market has become almost saturated with scratch mixers of all sizes, shapes, colours and prices. So to keep up with the Joneses and also to bring a new trick or two to the table, Vestax have released the 05 Pro III. We’re not talking major remodel, simply a nip and tuck in the right places but the addition of one major feature makes this a serious upgrade – a send/receive loop. Clearly Vestax have watched the market and seen where it’s moving. But more of that later.

Well not too much. Like I said, it’s much more of a sorting out the odd deficiency with the already great Pro II. But lets get the cosmetics out of the way. Gone is the brassy colour synonymous with Vestax 05’s and 07’s. Vestax seems to be unifying it’s range to a standard silver. Much better sat in between the blacks and silvers usually found on today’s decks. And the faceplate decals have been tidied up as well making for a cleaner layout. 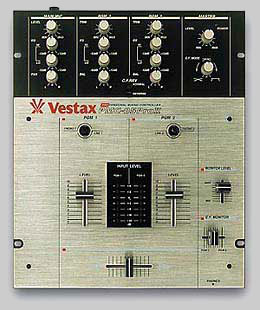 • MOVE YOUR MOUSE OVER THE MIXER FOR A COMPARISON •

Comparing old layout and new we can see one or two minor but useful changes. Firstly, the channels are now closer together. Not immediately noticeable at first look, but if you’re familiar with the MKII, you feel the difference. This allows for easier manipulation of both faders for tricks and means that you no longer needs hands like Michael Jordan to use the mixer. I don’t know if this is a side effect of making space for the send/receive channel but it’s welcome all the same.

And at the same time as moving the channels, Vestax also decided to upgrade the line switches. A little longer, thinner and a shorter distance to travel, these switches feel totally solid and don’t leave any click at all.

Next up – the monitor faders have been moved up the face of the mixer so now the crossfader area is totally clear of clutter. But there is a new addition in this area – a master cue switch – so no more guesswork when it comes to mixing. Just a minor niggle in this area – from a cosmetic point of view, why didn’t Vestax move the monitor section further up and line up the new grey bar decals properly? Like I say, minor but aesthetically annoying.

The rest of the features remain pretty much the same. The top area of the mixer is identical to it’s predecessor. The mixer range has been rationalised by using the same knobs as the PMC-007. Sadly, the already finger crunchingly small gap between the knobs is made smaller still by these fatter knobs. I’m not known for my outsized fingers and I struggled with this small gap. The good news as far as EQ goes is that the bottom end EQ has been extended from -12 to -24dB – meaning we scratch DJ’s get a wider bass range to remove. It’s still not a kill but still pretty good. And in another minor cosmetic tweak, the channel reverse switch now appears in shiny sliver.

Not being an 05 Pro II user for any length of time, it’s hard for me to comment on how the Pro III faders compare as far as feel. What I can tell you is that this 3rd generation PCV fader is super smooth and solid. The cut in time is pretty darn good as well and those of you who follow skratchworx know what a stickler I am for such things. And should this fader not prove to be good enough for you, the added bonus is that you can fit a P&G if you want.

The upfaders perform well enough but not in the same league as the crossfaders. I detected a lack of linearity in the upfaders. Probably not too important for most scratch DJ’s, especially when you consider there is no curve on the ups anyway. Maybe I shouldn’t expect too much from this mixer when you consider it’s market position and price.

Turntablists are a traditional bunch, fearing change to a staggering degree. But you can’t stop the march of technology and Vestax have realised that the scratch scene is beginning to demand more. While effects have been used by many DJ’s for a long time, it’s only recently that scratch DJ’s are showing an interest in using effects in their sets and recordings. And realising this, Vestax have now added a send/receive loop to the 05. And this feature is now standard across their scratch mixer range with more to come.

As you can see in the above shot, I borrowed a Pioneer EFX-500 to check out the FX loop. Happily, it worked flawlessly. You send channel 1, 2 or both. You cannot selectively decide how much of each channel you send or receive as there is only one loop. But again, for a mixer in this price range, we can only expect so much. This FX loop does now allow for sessioning as well i.e. linking several mixers together. Ideal for jam sessions with only one master output available. And it can also be used for a 3rd input – albeit not that controllable. One problem – the location of the ins/outs is at the front of an otherwise uncluttered mixer. I can see why though because the back panel of the mixer remain unchanged from the Pro II, thus not needing a redesign and keeping the price down. This loop is a quality addition to this mixer. Hopefully, we’ll see more scratch DJ’s exploring the possibilities of effects as an FX loop is becoming standard on many mixers.

The 05 Pro is a cracking mixer and a worthy upgrade from the Pro II. While it may not have the P&G crossfader and channel curves/reverses, the build and audio quality are rock solid and will last for years. The improved crossfader make this an attractive option. Add to this the improved layout, extended EQ range and addition of a cue monitor and not forgetting the main new feature – the FX loop that the competition doesn’t have – Vestax have a winner on their hands.

NOTE: Due anytime now is the 05 Pro SL. Costing approximately £50 more, it replaces the FX loop with a sampler.

In the same style:
Ecler HAK 310 – £275 – Solid lump of Spanish loveliness. Not widely available in the US.
Stanton SA-5 – £299 – The Allies Beatdown mixer. Curves and reverses on all channels as well as a P&G crossfader.
Stanton SA-8 – £315 – Focus Signature mixer with P&G plus curves and reverses.
Technics SHEX1200 – £329 – Elder statesman and official DMC battle mixer. In dire need of a better crossfader.