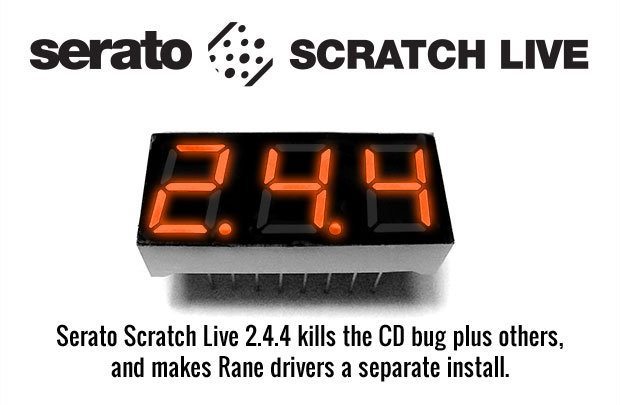 After a short period of beta, Serato Scratch Live has escaped its beta shackles and manned up to full fat 2.4.4, which fixes a long standing CD bug and generally makes your Serato world that little bit better.

With this release we have focused primarily on fixing bugs and improving stability. In particular issues that have been reported widely on our forum, most significantly the CD drive crash and kernel panics seen with the Rane SL4, Sixty-One and Sixty-Two.

The Rane Core Audio drivers are no longer automatically installed when using the Scratch Live installer. Instead, the individual Core Audio driver installers are now located in the Rane Device Drivers folder within the .dmg file.

Known issue (all Core Audio on 10.8 only): If the buffer size is changed via the control panel while an audio application is open, the actual round trip latency jumps to approximately 350ms. Re-selecting the Rane device as the audio device within the application’s Preferences restores the correct latency. Rane is working with Apple to resolve this known issue. Note that the ASIO drivers are unchanged.

We do seem to be edging ever so slowly towards v2.5 or v3 and whatever that is likely to bring. NI seem to be pushing Traktor to the max right now with remix deck workflows and iPad versions, leaving Serato with some ground to make up as far as features go. I can only assume that this edging is to do with possible big upgrades. I know the Scratch Live die hards are getting… I was going to say itchy feet, but that somehow seems inappropriate now. Restless is a much better word. I’ve got my eyes on the upcoming Musikmesse for something to happen. NAMM was somewhat bereft of the usual Rane and Serato news.