About those Traktor Remix Decks… 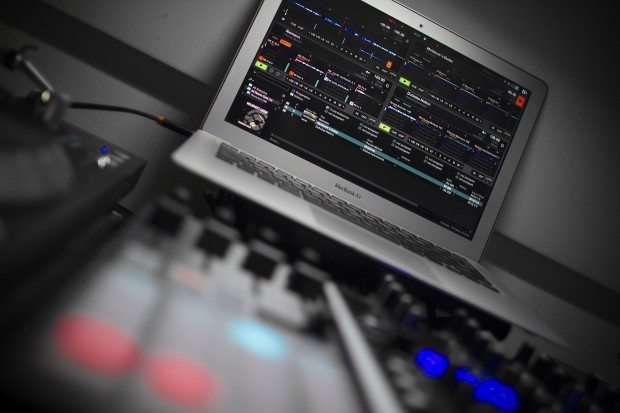 Back in Jared’s and my initial article about Traktor 2.5, I made the bold statement that “What Traktor is potentially doing here is revolutionising the DJ software market”. For me, DJing is a multifaceted beast that has art, craft, and science all bundled into a swelling cluster-thing of methodology, and to make matters more complicated all manner of live performance is – through marketing, misunderstanding, and sometimes just convenience – lumped into the DJing schema too. What Traktor 2.5 is attempting to do is reign in a lot of the disparate ideas and approaches and put them into a single, recognisable framework; the new paradigm of DJing has to look at least somewhat like the classic one or it will lose too much of what made DJing so appealing in the first place. 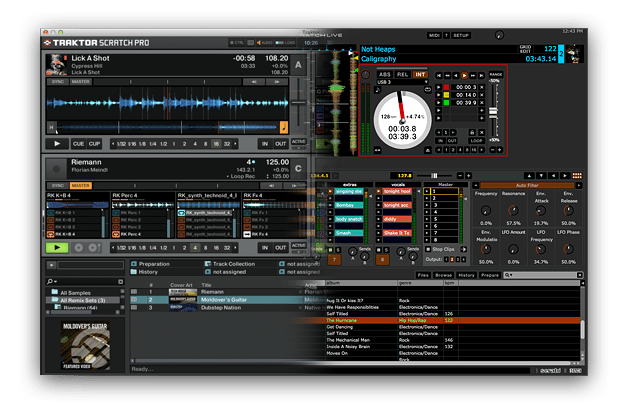 Just to clear things up: yes, I know that Serato and Ableton have been experimenting with all this kind of thing for a while now. The Bridge is a fantastic idea that has some amazing possibilities, but unfortunately it’s just a little bit too clunky in execution for most. I know that through the wonders of Max/MSP, Max For Live, Pure Data, Reaktor and beyond that there’s been all manner of weird and wonderful new ground broken when it comes to live performance. I know all this, and there’s probably twice as much I don’t – so I know that there are smart, boundary pushing people in many, many camps all coming up with implementations of ideas that have all brought us to this point.

This is the thing: NI are the first to get it really right with their remix deck concept. It’s not perfect, not by any means, but because the groundwork is all there it’s just a matter of building on the foundations now.

Remix decks are, as you’re no doubt aware by now, essentially a 4×16 Ableton Live-esque clip grid in a deck. Now, Live wasn’t the first to think about phrase based sequencing by any means – that’s been going on since more or less the beginning of electronic music. But I’d hazard a guess that it was Live that made the masses realise how powerful it was, especially for live electronic music production and performance. People have been ‘DJing’ with Live for years, but this is where (for me at least) the word DJing starts to get fuzzy. Sure, you can play whole songs and blend them into each other in Live, but I can think of very few things more boring and stagnant. The Live environment facilitates performing in ways that the traditional DJing paradigm can’t, but the two methods never really played well together. Until now, that is.

Why the Remix Deck Concept Works

So, remix decks are an alternative deck mode to standard track decks. They have a master tempo, global filter, EQ, and FX routing, and can even be scratched. Essentially, you’re running a phrase sequencer inside a Traktor deck, replete with the ability to integrate it with track decks, other remix decks, or live inputs. Importantly though, it’s more or less totally analogous to a standard track deck in the way that it’s loaded, sorted, and the things you can do with it.

Drill down further though, and you can assign individual cells their own pitch and effects routing, and give each of the four tracks their own filtering. Each track can either have its cells interrupt each other from the beginning or take over from where the last one left off, and you can monitor individual tracks within the deck. It all makes a lot of sense, and as long as you focus on DJing with the tracks, not thinking of them in terms of a sequenced live performance, everything just feels fluid and right.

The fact that remix decks can be saved and loaded just like normal tracks, including tagging and sorting options, means that there’s immediately more of a searching through your record box feel to the workflow. Something I’ve enjoyed experimenting with is dropping a standard track, with its start point at various cue points, into a column of a remix deck – and then adding samples and so on from there. This means that I can load up a track and have a custom layout of samples to play on it. 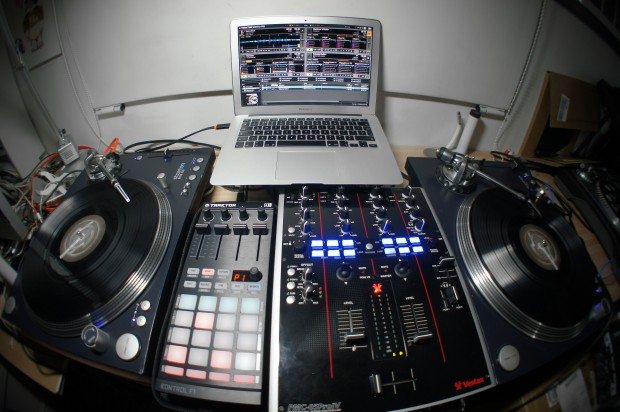 In the past, I feel like there’s been something of a rift between scratch DJs and controllerists. It’s always struck me that the root of it is down to controllerism being lauded as the ‘next turntablism’, when in reality the two arts are completely different in approach and methodology – in fact in many ways, the two are incongruous. Part of that, in-depth discussion about regimentation and musical theory aside, is that the tools that have facilitated controllerism have by necessity more or less excluded any opportunity for turntablism to get involved in the action. A remix deck’s ability to be scratched is the first time I’ve seen a large developer (rather than disparate efforts by small developers) make a real effort to intertwine the two.

Any time you fancy, you can lean over to your turntable and use the Traktor Scratch vinyl to manipulate the playhead of the remix deck. Glitch things up to your heart’s content, scratch the snare, and then jump back over to the F1 and drop your lead line. A quick one shot later, and you can backspin to the point you triggered it and it’ll be in the stream that you’re scratching. It’s great fun, but we’re pretty much at day one level implementation.

Each remix deck track will remember a single trigger point, attached to the main timeline. You could play around with cells in tracks 2, 3, and 4 for five minutes, trigger something in track 1, then go back to remixing 2, 3, and 4 for another five minutes – backspin far enough and you’ll get to the point where track 1 is waiting to be triggered again. As cool as this is, the single trigger memory means that you can’t for instance, play a drum loop with kick, snare and high hats and then backspin to scratch the loop. All the remix deck will remember is the timing information for the last time each of the tracks was triggered. Shame, but it’s still cool for early days and shows that the technology is there, albeit in an early form.

Thinking of the Future

I’m a little torn, because a pet peeve of mine is that people are so rarely satisfied with their setup when really it’s practice, not new gear and features that will make them better. In spite of this, I’m about to reel off a bunch of features I want to see implemented so that I can really go nuts with the remix deck concept (and if they appear, remember where you read it first – Ed).

First, and nice and simple, I want global key transpose. Not one that works over the entire track, that would be facile; I want the ability to attach certain cells to a single knob so that I can keep drums and percussion flat but re-key the melodic elements. If you can keylock samples to their stated pitch in case of tempo changes, I don’t see any reason why an overall key change (like on a track deck) shouldn’t be available.

Next, I want momentary mutes. At the moment, mute is a toggle from the F1, and it would make a lot of sense to be able to drop things out and bring them back in at the touch of a button. Of course, you could use the volume faders to achieve this, but they’re not very sharp. This is part of a larger issue. The F1’s integration with Traktor 2.5 is excellent, but it’s just too closed off. To really blow the doors open for remix decks, NI need to open up the ability to map remix deck functions. I want to be able to change what the knobs and faders do on the F1, and on a wider scale I want to be able to use the remix decks with Maschine, with an MPD, with a Monome style controller. I want to be able to use a Maschine either side of a mixer and play with them just as I would two turntables, with unique, layerless buttons to jump from page to page. That’s what I really want.

I can understand NI’s decision to keep the relationships between remix deck cells pretty simple, as it’s a workflow that people coming from Ableton Live will understand. I want to be able to go deeper, though, and I think a lot of other users will too. If each cell were truly an island, and choke groups and other relationships could be set up between the cells, I would be able to, for instance, load up a remix set with stems to a track on the first page, then on the second page have one shots that I could play over the top of them. If remix decks right now are Ableton Live’s clip view in Traktor, I want my MPC (or Maschine, or Live’s Drum Racks) in Traktor. That said, the potential for 16 individually playing (in four remix decks) tracks is presumably pretty CPU intensive as it is – but this is my wishlist, I’ll ask for what I want!

Finally, some way of improving the internal sequencing in the remix decks to allow ‘recorded’ one shot played rhythms to be looped and scratched. Hand in hand with this would be a ‘self capture’ – at the moment the cell capture only pulls things out of the other decks or the loop recorder. If i could set a remix deck to loop, build a loop with one shots, and then when I want to come out of the loop capture everything I’ve done to an empty cell ready to carry on with my work in the deck, I think I’d be satisfied that the gap between controllerism and turntablism had finally been closed.

Oh, what am I talking about, I’m perpetually unsatisfied.