If there’s one part of a mixer that takes the most abuse, it’s the crossfader. A broken crossfader has relegated many a decent mixer to the back of a cupboard, eBay, or the great mixer mountain in the sky. But help is at hand in the shape of third part fader replacements.

Back in 2005, the Pro X Fade hit the scene, specifically aimed at giving scratch DJs a viable third-party fader to drop in to their mixer of choice. This was aimed at mainly being a drop in for Penny & Giles faders, thus the fader itself required some wire work to make it fit a wider range of mixers.

Coming up right behind it was the Audio Innovate Innofader. Elliot Marx’s vision was to have the Innofader fit as many mixers as possible out of the box, a task made difficult by a bewildering range of fader implementations. But undaunted, he set about laying his hands on every type of mixers and by hook or by crook getting the original Innofader to fit everything. Well almost.

But there are limits. While clever physical fixes were devised (see the Innobender), there were distinct mechanical and electrical problems that thwarted Elliot’s vision, thus the Mini Innofader was born, something which in itself brought a new set of issues, but established the Mini Innofader as the goto premium fader that appeared as standard and as optional upgrades in many new mixers and controllers.

But now it’s time for the original long-bodied Innofader to get an upgrade itself. The Innofader Pro 2 is here, so let’s open up the familiar box and see what’s inside.

The output resolution is higher. Previously it had just 256 steps across the travel of the fader and now 1024. And the response is increased too. To be honest, the original Innofader felt stellar anyway, so these are just numbers to me, but anecdotally Elliot tells me that rather more discerning and skilled scratch DJs can tell the difference and have commented that it feels better. I however can’t really tell the difference from memory.

One big improvement is the ability to adjust the lag distance on either side of the Innofader Pro 2. The old one could do it for both sides at once. There’s also a port so that you can hook up an Innojuster, and have that sit on the outside of your mixer. The longer I spent trying to tweak the Innofader Pro 2 in my Rodec, the more I craved an Innojuster. It may well be worth contemplating adding an Innojuster into the price, especially if you install it into a mixer that is likely to be shared.

Out of the box compatibility has been increased to include more Xone mixers, Ecler mixers, Numark M mixers, Numark NS6 and 7 controllers, Rane mixers, Technics mixers, and  a good lump of Vestax mixers too. This is a general description, so it’s best to check out the proper compatibility chart before dropping cash.

Essentially the Innofader Pro 2 addresses some growing pains, adds some cool stuff, and makes it even more universal than before. Once fitted, it’s pretty much the same fader, but getting there is much easier. 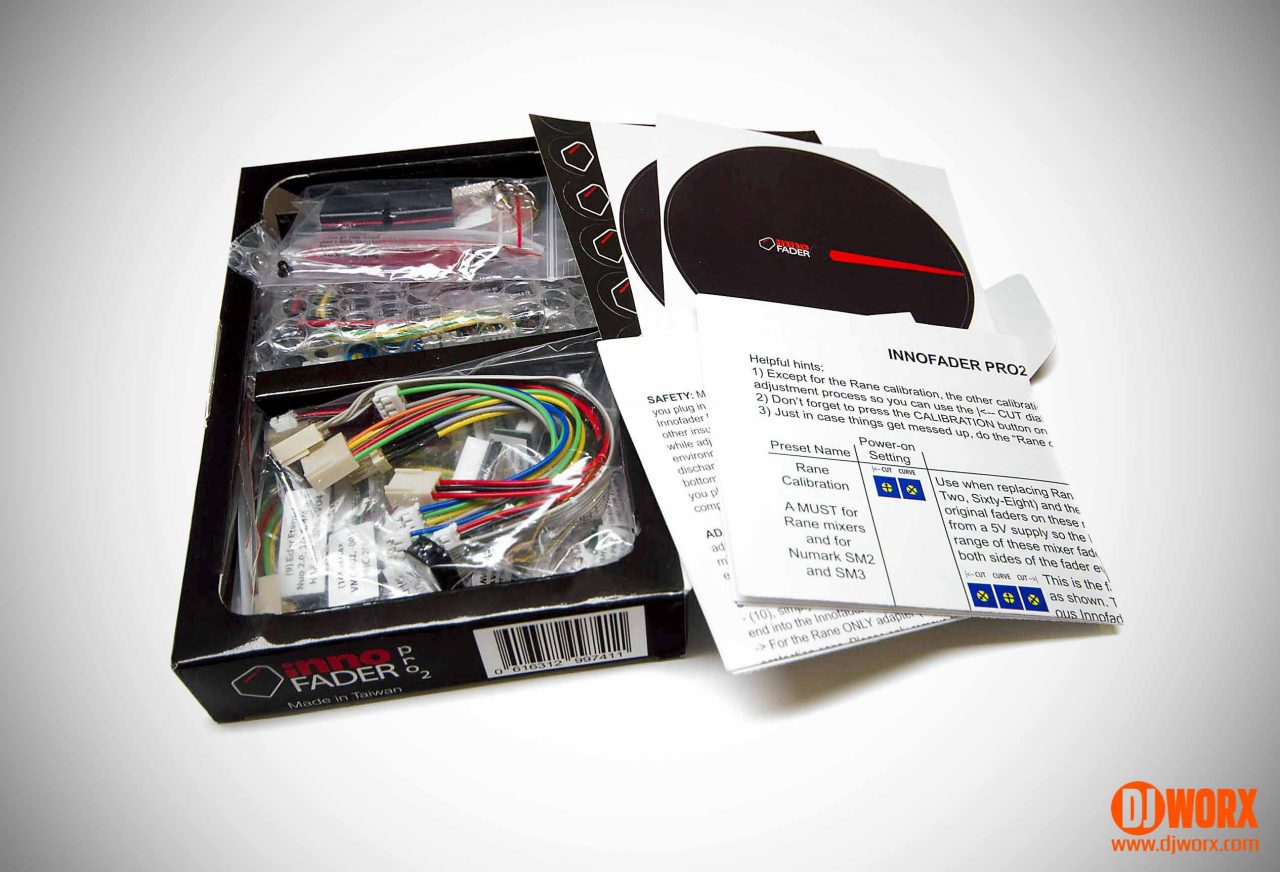 Bloody hell — there’s a lot inside this box. It’s weighty to start with, but Elliot’s desire to make the Innofader Pro 2 universally plug and play has expanded the contents to a pretty insane level with numerous connectors, cables, screws, and plates, as well as vinyl stickers and 2 double-sided pages crammed with verbose fitting instructions. 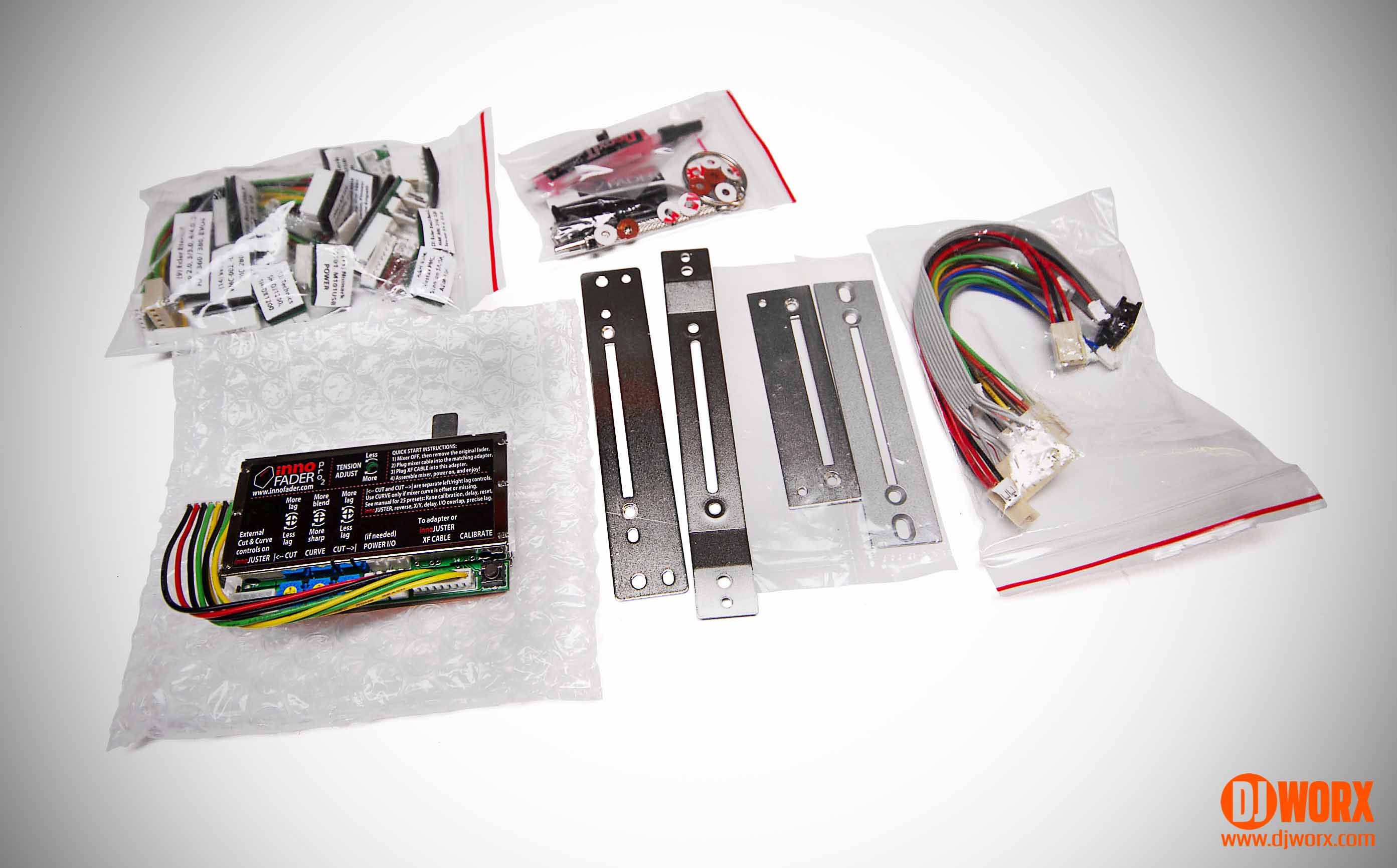 Thus the first impression is that the Innofader Pro 2 is complex and daunting. I know it’s an uneasy balance between Elliot’s plug and plug ideology and the industry’s rather annoying insistence on doing things their own way, but the very first impression is “wow that’s a lot of stuff I’m not going to need”. For me, all but one connector would go unused. 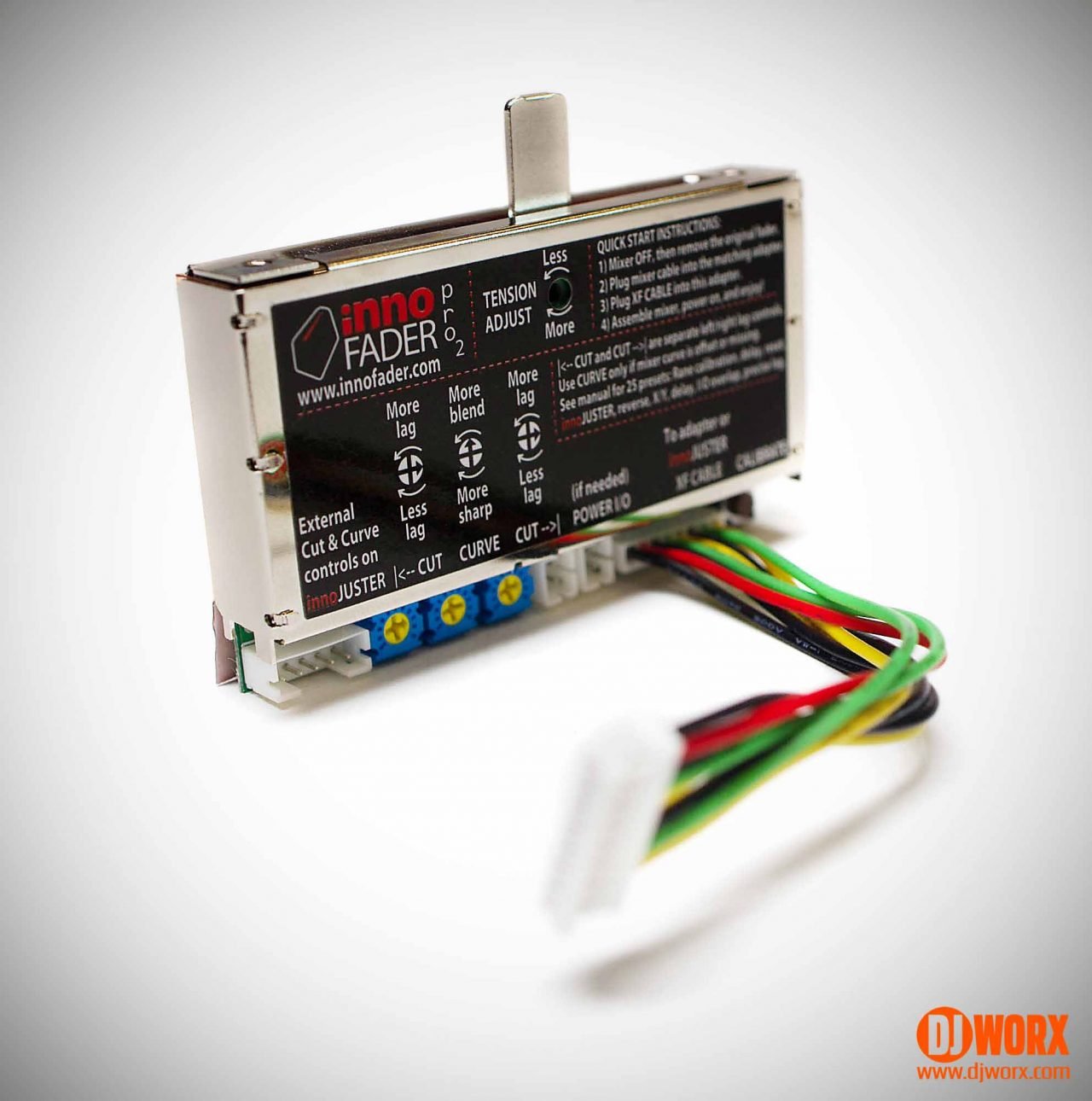 The fader itself looks different. It’s been redesigned to cater for additional connections like onboard powering of line faders and adding in a connection for the Innojuster too. Elliot has also been careful to make installation as safe as possible, so the fader itself has a copper shield over the main circuit board to cut down on interference. And the plethora of different adaptors have a name tag that doubles as insulation. Clever. And yes, the plastic shrink sleeve has gone. You should still be careful installing it, but it should be a lot safer now.

Fear not, because you don’t need it all, nor do you need a degree in electronics to get it to work. You do however really REALLY need to read the enclosed manual sheets, and if still unsure reference the Innofader website. The Innofader Pro 2 is a definitely a matter of read, plug, read again, and then play. 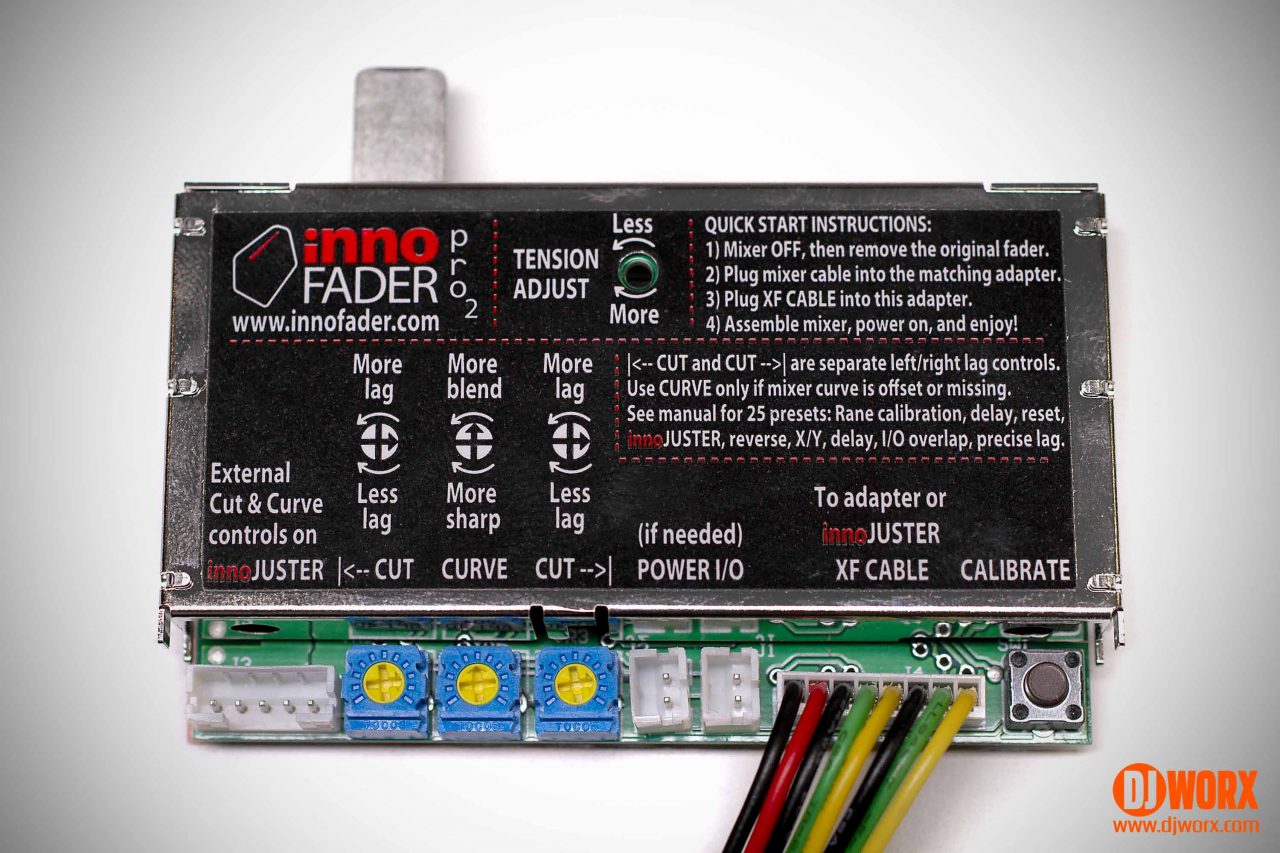 Obviously I’m just a man, and like all men I barely have time to read any kind of instructions. So I busted out my trusty worxdriver, flipped the lid on my faithful Rodec Scratchbox (the recipient of many crossfaders), and started to play.

Now I’ve done this MANY times before, so felt confident enough to follow my nose rather than the instructions. And sure enough, my nose got me as far as getting the fader installed and working, but the settings were quite a way off what I liked. So like it or not I had to resort to the manual (1 and 2) to get things the way I wanted them.

So now we have to dig into presets. A combination of 25 different dial settings, calibration buttons settings, and power off/ons will allow you to change settings on the fader as necessary. I ended up adjusting the fader to be entirely open so that I could just tweak the lag with the dials. One other thing to note — on my Rodec, the mixer curves were bypassed by the Innofader Pro 2, meaning that I had to get the settings just as I wanted them before fitting it all back together again. I don’t know if will be the same for everyone else though.

In my case, it was a matter of reducing the lag down to a very fine amount. Yes it’s fiddly (the fader has to be out of the mixer to access the controls) and time-consuming (many power recycles), but the control you get is worth it. Essentially you get out of it what you put in, but depending on your model of mixer and your requirement, set aside a minimum of an hour before you can be happy enough to screw the lid back on.

Like all of our reviews, this is about our opinion, and not a reproduction of the manual or a walkthrough. So read pages 3 and 4 to get the full lowdown of what can be adjusted.

A note about the instructions — I like to think of myself as more than capable of installing a fader, but given the complexity of the Innofader, the 4 pages of instructions really need simplifying and making clearer, especially when dealing with something that runs on electricity. 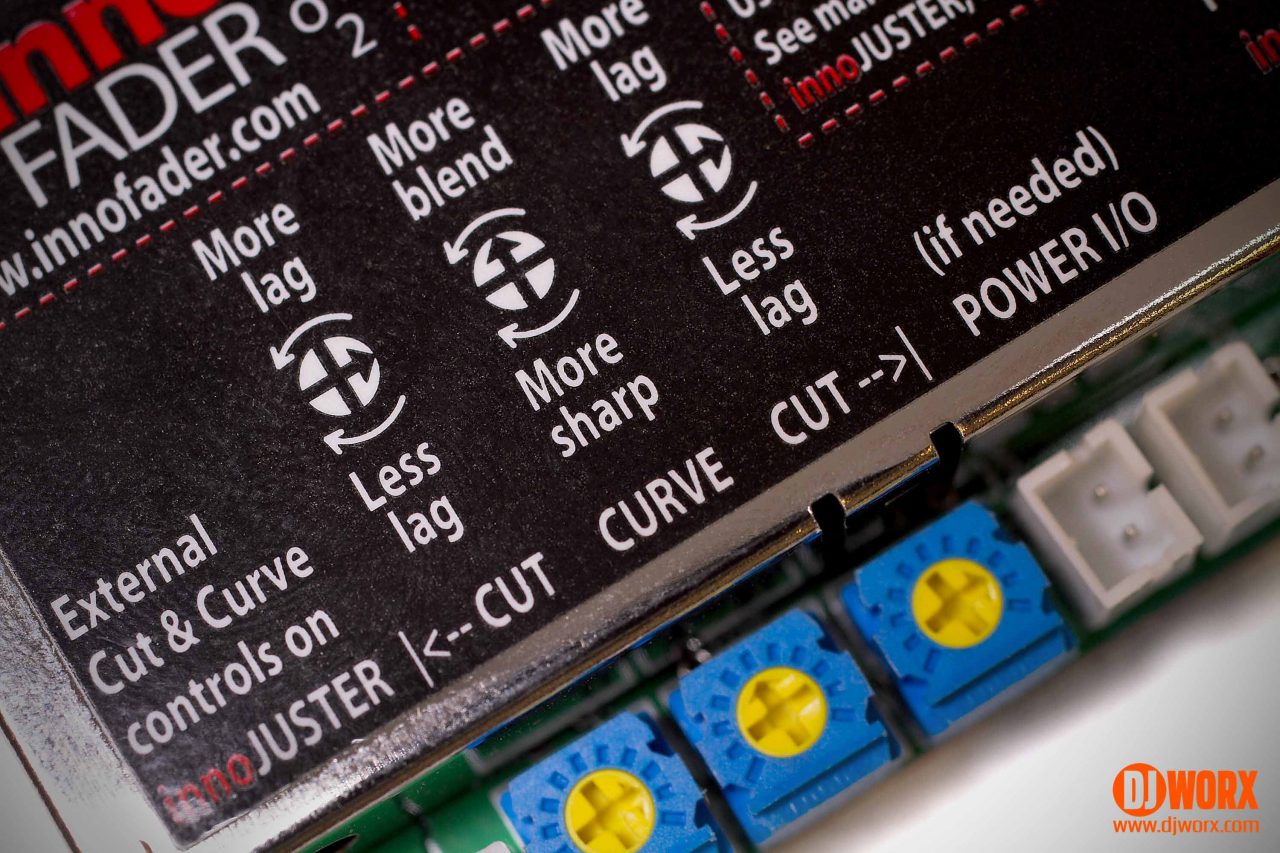 Now to how it feels. As I mentioned earlier, I really don’t care about numbers. DJing is about using your hands and feeling the music and your gear. And this is why people have favourite faders. I don’t have a favourite per se, and find myself happy with all pro faders. I favour a lighter one with very smooth travel and a tiny amount of lag, and find that the Infinium in my Rodec is still my go-to fader. The Ecler Eternal was also high on my list, but those days are gone. But the Innofader Pro 2 continues the silky smooth feel of its predecessor, and offers tension adjust should you prefer a little more resistance. Importantly, it adds some weight that stock faders and the Mini Innofader lack. The end result is a nicely weighted buttery fader that can free run with a blow, or can be tightened to be more fixe friendly.

Summing this up, my first impression is the lasting one. The Innofader Pro 2 is a complex beast, with a lot to read up on before installation, and probably a good amount of patience to get it adjusted to exactly how you want it. But your patience and perseverance will be rewarded with absolutely stellar flexibility and feel. 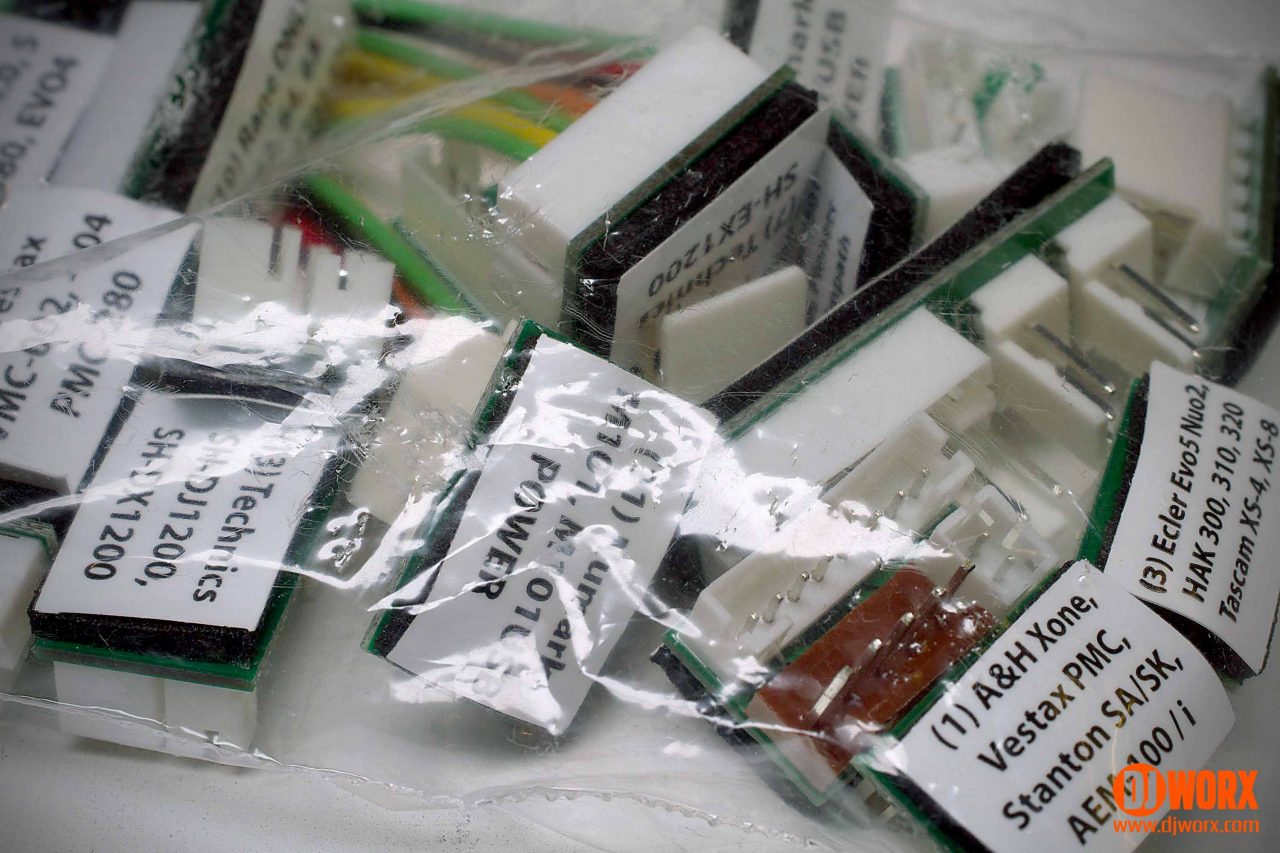 It’s hard to get past the first impressions of being complex and having bought a bunch of stuff that you’re highly unlikely to use. But at the same time, the logistics of having a standard fader that fits everything easily is made near impossible by an industry that can’t seem to adopt standards. So as much as I’m critical of the over the top nature of the package, I definitely take my hat off to Elliot for his dogged dedication to the Innofader project, and especially his unparalleled customer service. Without his hard work, we wouldn’t be able to swap out factory fitted faders for something more luxurious.

I’m sure some of you will be asking if you should upgrade. Given that the original Innofader already feels amazing, there seems little point in upgrading, unless you really need to adjust the lag on both sides, or feel the need to transplant it into several mixers in your setup.

The reality is that it’s not hard for the Innofader Pro 2 to reign supreme. The apparent lack of competition (side note — whatever happened to the promising Tribologix?) means that it has a pretty clear run at the modern DJ market. That said, it hasn’t made him complacent — he has continued improving the Innofader Pro 2 and making it better than before. With the industry seemingly hell-bent on making his life incredibly hard (and by extension DJs too), he’s persevered to make the best fader that money can buy.

The Innofader Pro 2 is a complex beast, with a daunting amount of stuff in the box, and equally complex fitting instructions. But don’t be put off, because it is without a doubt the most capable third-party fader on the market.